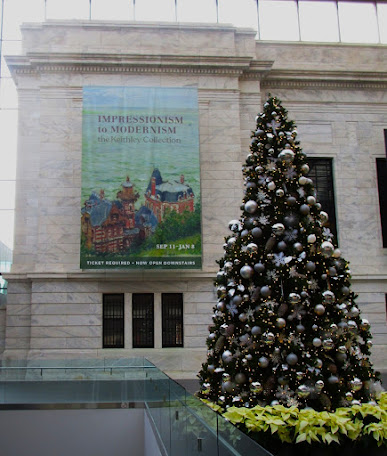 Blessed with good weather, my husband and I decided to spend a day in Cleveland to do some of my favorite things. We started with a visit to the Cleveland Museum of Art, went on to dinner at the Siam Cafe, and finished with Peter Mayer's Star's and Promises tour.  (Peter is the lead guitarist for Jimmy Buffet and we've been going to his Christmas performances since 2006).  I had never been to The Flats in Cleveland where he was playing and boy I'll need to go back for some more exploring! 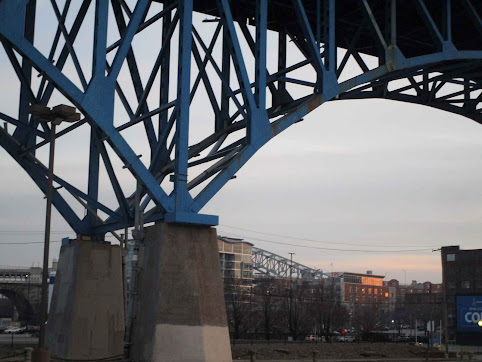 The view from outside the Music Box Supper Club, The Flats, Cleveland Ohio

I was so excited to visit  the art museum.  This was our first time back since covid and they have an exhibit I've been dying to see!  In 2020, Clevelanders,  Joseph and Nancy Keithley gifted more than 100 pieces of art to the museum.  Now that figure is a lot, but when you add in the fact that the art was worth over 100 million dollars, it's enough to make anybody say, "WoW"!  The exhibit was called, "Impression to Modernism, the Keithley Collection".  It's amazing how much you can learn seeing paintings for the first time. 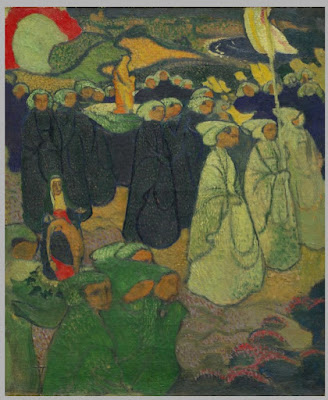 Procession or Pardon at Perros-Guirec, Maurice Denis, 1891
So I was immediately drawn to this painting.  In person, the colors are so compelling.  I was struck immediately by the similarity of this painting with works by Van Gogh who was also painting in Paris at the same time.  Both used big blocks of colors and abstracted reality to help define the composition and create movement.  Both were interesting enough influenced by Paul Gaugin.
I bring this up to prove the point that all art is influenced by what came before.  Even the masters "Steal like an Artist".  That said there is a difference between influenced and derivative.  When you design a quilt are you "influenced" or did you step over the line and derive from another's work?  It's something to think about for sure. 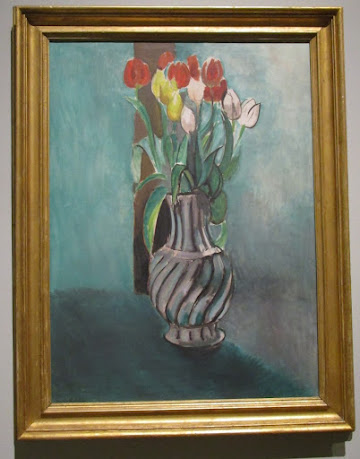 Tulips, Henri Matisse, 1914
Now I'm not one for still life's normally, but this one had me wishing I could bring it home.  I thought it an excellent example of how value can define the space of a piece.  Plus the contrast between soft edges and hard edges is so interesting. Not to mention, it has you wondering what else is in that room.  I did get a giggle from the museum's take on the painting though. 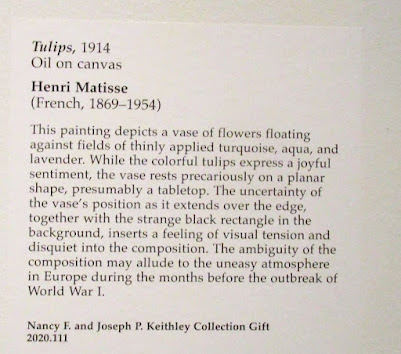 I don't know about you but I don't think Matisse was "alluding to the uneasy atmosphere in Europe"  while painting tulips.  Sometimes a tulip is just a tulip!  The takeaway from this?  Make your artist statements really convey the truth about your piece, not some line of bull. 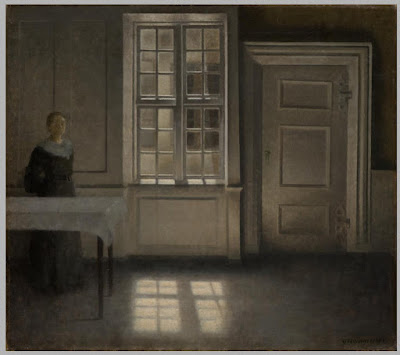 Vlhelm Hammershoi, Strandgade, Sunshine,  1906
Oh, I love this painting!  First of all, the composition is made up of rectangles.  I swear I'm going to do a simple line drawing of it and see where it takes me.  THEN the artist's deft use of value masterly conveys  the  mystery of the moment.   I mean who is that woman?  Why is she stuck in the corner?  Plus it has me thinking about what is outside that window.  THEN let's talk about hue ... the palette is all in the same color family but still, you can see every detail.
What did I learn?  Monochromic palettes are highly effectual at creating mood.  Think of this painting in a three color palette.  It would change the whole thing.  Also, the light source in a composition should be thoughtfully placed. 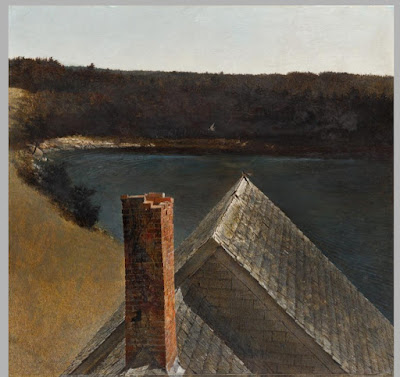 End of Olsons, Andrew Wyeth, 1969
Here is another painting I wish was in my house so I could look at it everyday. Of course, Wyeth is known for his realistic rural scenes.  This one typifies his skill of capturing the beauty of a daily moment, like a glance out of a second story window.  This house was owned by long time friends who had died recently.  This was the last painting done at the property and was Wyeth's final good bye to the house and them.
This reminds me how important a great crop is to a composition.  Also that simple lines lead to simple shapes and that all makes for a solid piece.  Andddddd....keep an eye out for great compositions in your everyday life!
Speaking of catching a glipse of something that would make a great quilt...I saw this hall outside the East Wing of the Museum. 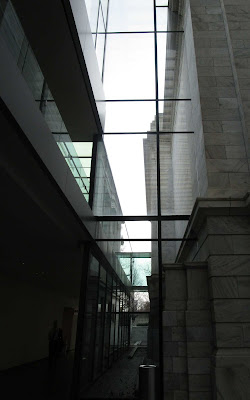 It  did feel good to get out of my little borough for the day.  It really feeds your creativity!
To my Christian friends, I want to say Merry Christmas....to everyone else I want to send joy and blessings of the season .....and....thank you for reading and participating in Off the Wall Friday!
So What Have You Been Up to Creatively?