The Umbrellas Continue - Off The Wall Friday 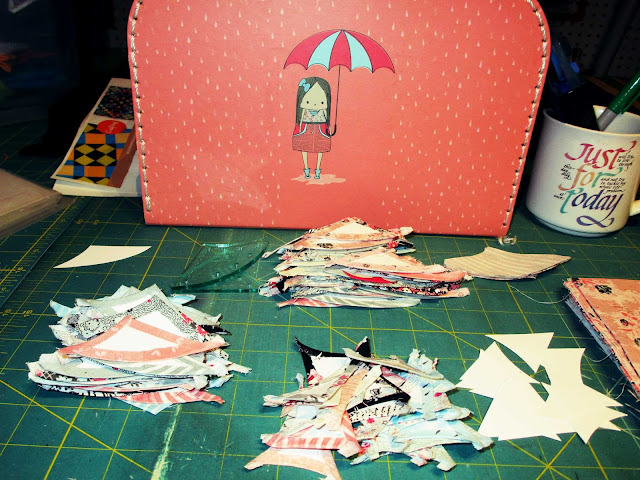 Am I the only one that is kinda shocked that we are going into the third week of August?  It's starting to get darker earlier, ragweed season is plaguing me and all our customers are calling for fall clothes!  How did THAT happen???  Not to mention, this will be the first time since 2000, that August doesn't mean Back to School.  Instead my only daughter is starting a new job in her chosen field and she's out to change the world.  I repeat...how did THAT happen?!? 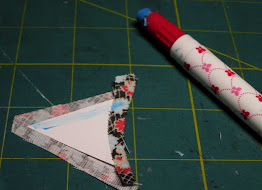 So with all that, I was glad to finally master glue basting little umbrella pieces  in my latest English Paper Piecing project.  It only took hours of doing it over and over again.  I do like the glue stick pen and am excited to try it with other pieces , like raw edge applique or something like that.  It was kinda messy though and I managed to go through 2 refills.  I think in the end though, it is a lot quicker to buy precut paper pieces and glue baste.  That said, its easier to sit in front of the tv watching a movie if you cut them yourself and sew baste. 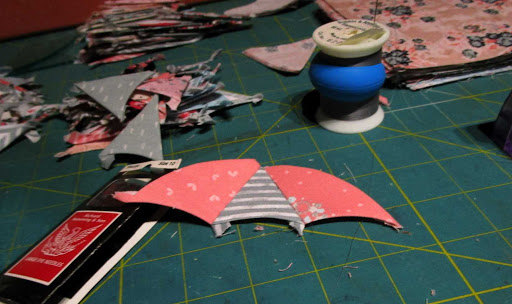 Finally, I'm at the sewing them together phase.  It's fun to match up the umbrellas.  Who doesn't like playing with pattern and color??  I did design two alternative quilts for these little blocks to be featured in, but since both designs ended up in the trash....I won't bore you. So that's my goal this week, come up with a new layout design that will feature this pretty line of fabric better and get the umbrella's sewn together!!

Those little umbrellas look darling. I, for one, am sad that I don’t get to see the design ideas that landed in your trash can! The ideas that don’t work out are like rungs on the ladder that you need to climb in order to reach the GREAT design that won’t come to you until you climb through those duds to reach the top.

I love your wee umbrellas and applaud your persistence with the glue stick. I just know I'd have had my fingers permanently stuck inside one of the umbrellas before I was finished! Looking forward to wherever these colourful little creations end up. :-)

I did not know about glue basting with English Paper Piecing. I have abandoned it although I love hand work. The whip stitch just overwhelms me for some reason. You go girl!

Thank you for all the encouragement and the thoughts on this process!! Your comments really mean a lot ...truly!!