An Evening with William Wegman - Off the Wall Friday 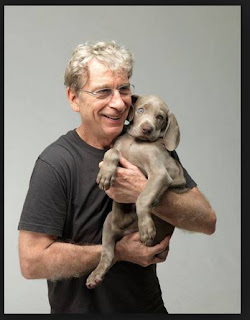 Tonight, I was lucky enough to get to hear a lecture given by William Wegman, of Weimaraner dog fame.  It was such a great lecture because he started with the first photo he ever took and then told about how he started taking pictures of his first dog - Man Ray - named after the Surrealistic artist.  The lecture then traveled us through this man's 50 year career and gave us a glimpse into his creative process.  I was sad when it ended.

Something that really struck me, that I didn't really expect, was that you could tell how genuine Wegman is.  He is so unassuming about his work and you could tell he did it to explore some need that was within him.  If people like it - that was good - but he was going to do it either way.

So as I was watching interesting poses of dogs go by I had these thoughts. . . . .


#6 is from the fact that while Wegman has continued to enjoy widespread success with his series of Weimaraner Dogs (and obviously loves them), he has taken up painting and collaging ."Apparently, some people like them and some people don't", he off-handly said.   You could tell that it didn't really matter to him one way or another.  He found the need to take up painting again - so he was going to do it.  He also, was kind enough to show us his work  - some more successful than others and how he is improving in the media.

All in all a great night!   I highly suggest you take some time and look through this man's body of work!  Amazing!

Hi Nina Marie, thanks for your thoughts. It's true that being genuine is so important, and in the end we make are because we love it and have to, no matter what others say. Thanks for sharing your evening and introducing me to another artist!