Now when I left for DC last week, I had a solid idea of where I wanted to go with my next big
project.  Honest.  Pinky Swear!  Then I went to see the National Gallery  and the Sacred Threads Exhibit  and now I have several ideas of where my next project should go.  Not to mention the dozens of inspirational photos I took in the three days.  All of which adds up to me deciding on what to study next. 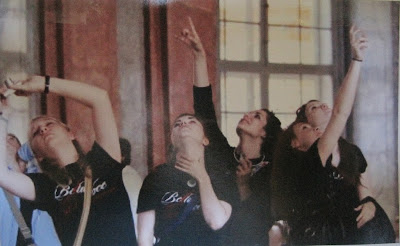 (As an aside - if you're ever looking for a wonderful place to take inspirational photos - try the National Mall.  OMG - its just one great composition after another - all the interesting architecture, people, odd objects you could ever want to digitize.  I promise I'll get some edited and share them!)

Seeing the Praise ladies hanging and throngs of summer tourists over the weekend, brought to mind a favorite photo I had in my first inspirational album.  Because,  I am hibernating in my air conditioned bedroom today (yes summer has finally hit the Erie lake shore), I thought I would play  with some new designs off of that photo.  Once again - taking out this photo - I was struck by the girls arms and the nice composition.

So today, I pared down the grouping to three - leaving out non-essential (for now) arms.  Then I started playing with back grounds.
I tried a realistic approach: 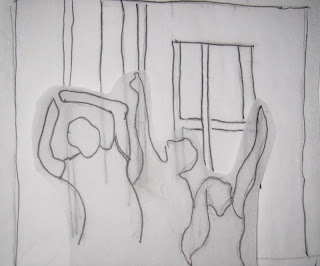 Then I tried changing the background to my favorite curves: 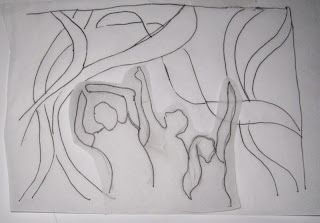 I wasn't too hot on the curves engulfing the subjects - they sorta got lost in the action - so I changed the background to a square: 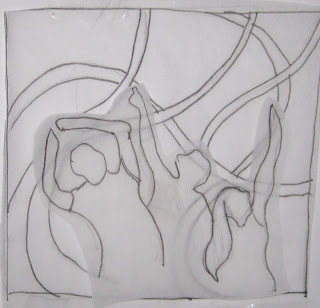 Which I liked better.  Then I tried chopping up the composition  - funky! 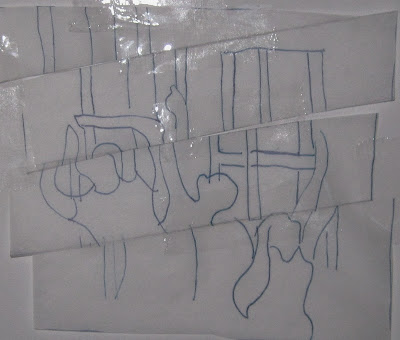 Now Elizabeth Barton recommends at least 24 potential sketches of a main idea. (Yes - you read that right 24!)  And really  - let's face it - I only have a glimmer of an idea - rather than a solid thought out one at this point.  But this photo has been rumbling around my brain for a long while and I thought I would start with it.

I promise to write up reviews on the National Gallery and the Sacred Thread Exhibitions soon!  Between the sudden heat and travel fatigue, I've had a hard time getting myself going this week!

So what have you been up to creatively?

Your composition is really taking shape. I've been eyeing her new book and may buy it. Hope you keep posting on this new design of yours.

I really like that idea of forcing yourself to do a bunch of sketches of an idea before you start really implementing it. I think I'm going to have to go that way given how much I've been struggling lately with composition. I love the movement in the arms, and would be interested to see the rest of your sketches as you do them.

I love your new piece -- and the idea that sketching is so important. But 24?! I'm going to have to try that!

Enjoying the process of your idea... 24 sketches?? Interesting, but not the way I work. Stay cool!

Saw on Quiltart list that you're from near Lowville--I'm from Pulaski, which isn't too far away from there. Small world! And no one here in North Carolina understands just how rural the North Country is, they think NY is all city!

Oh! I love your sketches, especially the next to last. I'm not a fan of the fractured art but that's just me. 24 sketches will stick in my brain now. I will never do 24 BUT will do more than just one since I now here that. Looking forward to seeing some of your other photos

For the record - I've been following Elizabeth Barton's design process for the last 6 yrs or so and I have never been disciplined enough to do 24 - LOL! usually I think I'm doing okay if I get 6 - 8 but I thought I would shoot for 12 this time!

This is showing great promise. So far I like the third one down, lots of nice movement. I admire your tenacity in trying for 24 sketches, even 12 is very impressive.

Yes you must give inchies a try! I have some embellishment and will spice them up! I have found some new inspiration too!

Just found your blog today and linked up my own blog too. Love how you show, the development of your drawing, but I am not sure that 24 variations of it would reveal more that 6 or 8 variations...Perhaps the changes are too subtle for me?!

Looking fantastic - I like your final sketch...even if it is just a glimmer of what you are going for. ;) I have nothing wonderful to share for this week! I did a couple of charity quilts for a lady at my guild and another just dropped off this morning...but it's been so hot that I haven't done a darn thing on any of my own projects!

I love seeing how you are working. I have never heard of Elizabeth Barton, so don't have a frame of reference, but 24 sketches for one project sounds very OCD to me. Unless something is really not working out in the first place, I don't see how that could work out. I would have lost my original vision long before that. But maybe that works for her. I like the 3rd sketch, it has enough detail to give interest in the background and not so much to overwhelm the main focus.

Thank you for showing the sketch process; I value seeing the evolution of an idea. I must check out Elizabeth Barton--but don't know that I'll ever make it to 24 sketches.