Thread Painting- If I can do it. . . So can YOU! Design Wall Monday 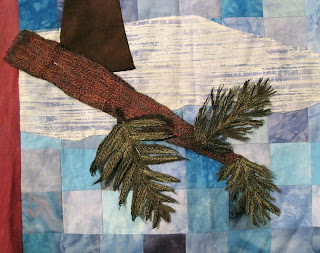 You know its been a long time since a project has given me trouble.  Usually, I start off my piece with a clear notion of what the finish project is going to look like and then I just work till I get there.  I know there are lots of people who like to see where the piece takes them and they totally enjoy the ride.  I. . . .am not like that.  So when the Christmas quilt started to give me fits. . . .well it almost got designated to the UFO pile.  Still, if I did that then another Christmas would go by without me having a new wall hanging on my wall.  So I managed to persevere through my fit and kept going.

The funny thing is that the thread painting, which I've never done in my life wasn't the problem.  The pines leaves are coming quite nicely even though they are a LOT of work and thread.  I'm simply amazed at how easy the whole process is really easy.

First you sandwich two pieces of solable stabilizer between layers of tulle and put them in an embrodiery hoop. The book said to use pins but I found they just got in the way.  I then set up my machine to do free motion quilting with bobbin thread in the bobbin and rayon thread up top.  With that done, I just started to draw with my machine.  Well. . .draw is a bit fancy. . . scribble is more like it.  I layered my colors so that the darkest ones were on the bottom and the lightest one - used for highlights were on top.  Little by little the pine branch was formed. 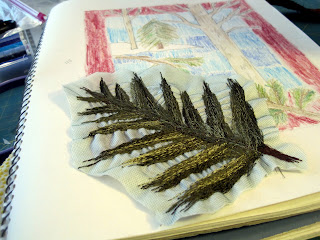 40 minutes and 5 thread colors later, I was satisfied with the work.   I took it out of the hoop and trimmed around the branch within a quarter of an inch.  Then it was run under super hot tap water and placed in a bowl of hot water to soak for 10 minutes.  While I was rinsing it, I made sure that the glue residue was gone.   I then towel dried it and set it aside to thoroughly dry.  It only took about 15 minutes.  Then all you do is trim around it with super sharp scissors.  You can also use a stencil cutter if you have it - just watch out -'cause those things get hot!  Still I found the scissor method worked fine and any left over tulle totally disappeared into the threads.

See Easy-Peasy!!!
So it wasn't the thread painting that was giving me the fits.  Its that once I got it all done, I realized that the scale of my thread painting was all wrong.  I thought I had been working on the bottom branches but once I got it up on my board, I realized that it was all too small.  Well that revelation took me about 45 minutes to come to.  Don't you hate when something is wrong but you just can't put your finger on it????
Anywayssssssssssssssssssssss. . . . .I moved the branches I was working up to the secondary ones in the middle and  started to think how I was going to do the lower ones which will need to be a lot bigger and therefore take a lot more time and thread.  sighhhhhhhhhhhhhhhhhhhh  If it ain't one thing. . .its another.
You can see what everyone else is up to at Judy's great site!!

At least you didn't do it directly on your fabric and then find out it was too small.

Nice thread painting -- and it turned into a design opportunity for you!

Love the thread painting. I don't think I could do such a great job :)

How great that you figured out what the problem was! Sometimes I just know that something is wrong, but I don't know what! So off it goes to UFO land!

Thanks for the demo! I'm glad you'll be able to use all this work in a different spot on your tree. That's a relief, isn't it?

After you've done the thread painting, and trimmed it, then what? Do you applique it down, turn under any edges? Do more thread painting to attach it? Inquiring minds, well this one at least, want to know. Because, it looks totally wonderful.

Thanks everyone for the kind words and the encouragement. Cathy - I think I'm just going to sew it down with a little more stitching - not turn under the edges because they add so much texture. I'll have to read the next section of the book to see what the author suggests. LOL!

impressed, impressed!!!
Wow...how could I have to 'run after you' in quilting??haha...
Beautiful, Nina :)

Wowzer-Thread Painting is on my Bucket List and I found your demo inspiring...maybe sometime this year I'll be breave enough!

I would love to see the finished tree! I have a Horizon 7700 and love this machine! I am still learning to use all the stitches!

I have the Janome 8900 and love it. You mentioned a book can you share the name of it? I love your thread painting.