Photographing A Quilt - Off the Wall Friday 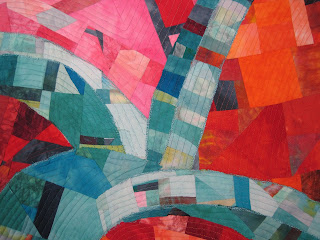 So more than once, I've been asked why I haven't monetize my blog.  There are basically two reasons.

One is because  ** Opinion Alert **  there are entirely enough ads in the world.  I don't need to add to this country's addiction to ads.

The second is because this blog is my way of giving back.  So many times over the years since the internet explosion, I've learned invaluable information from other bloggers and vloggers.
We've stolen a saying around this house from my brother in law.  "It's not worth knowing if they're isn't a tutorial on it on Youtube"  Funny but so true!

I say all of this because I spent today learning a skill that I read about on a website.  For years, I've wanted to take decent pictures of my quilts.  Although we have a great fiber photographer close by, I just wanted to save the expense and time (mostly time) and do it myself.  But how??

Andy Baird and Holly Knott to the rescue.  Their exceptional tutorial on how to photograph a quilt was not only informative but easy enough to follow that I could do it!  I highly recommend it to anybody who wants to take photos of their own quilts for competitions or their website.

I followed the directions  and bought all the items to build my own shooting set up.    Who knew that Lowe's would cut your two by fours for you right there!! Then I spent the afternoon building it and learning how to use my daughters complicated camera.  In the end, I decided that I could follow Andy's instructions with my Canon Point and Shoot.  The adjustments were simple to make to get decent photos. 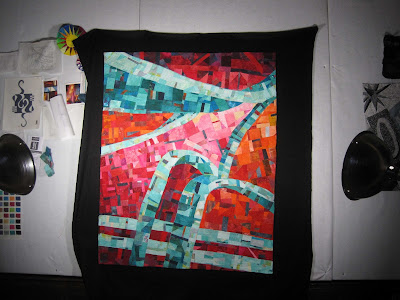 My first attempts weren't too shabby.  Really the colors are spot on.  BUT as you can see - obviously the tripod was not centered on the quilt.  It LOOKED centered but alas as usual - looks are deceiving.  I'll take new ones tomorrow since I left everything up just in case.

I can tell you that the whole set up cost me about $60 including the wood and hardware, bulbs, light shades, and background.  I used a precut fleece background that was on sale at Joanne's for cheapie.  That is less than one set of pictures from the photographer.  (Not that she charged me too much - just sayin')

So a big Shout out of Thanks to Andy Baird for his great tutorial and to all the other great bloggers who take time to teach the world something.

I finally took some time off this holiday weekend to catch up on some binding quilts and maybe get some sewing in before its time to start dyeing in June.  Honestly, I think we shouldn't have quilting bees but binding bees!

So What Have Been Up to Creatively?

Labels: Off the Wall Fri, SteallikeAnArtist

I agree......I've taken to eliminating many blogs simply because of the ads.....sooo distracting!
Your link for the photo tutorial is much apprecaited....by the way......LOVE your quilt!!

I'm sending you kisses for the link to the quilt photography tutorial. I knew that lighting and a camera tripod were important for good results, but I didn't know how to do it all within my budget.

Also thanks for the ad free blog. When the ads take over a blog, I'm out of there. I don't trust a blogger's review of a product if that product is advertised on the blog.

I agree with you about the "adds" particularly the blinking ones! Thanks for the tutorial. I always knew the lighting was important but never quite figured it out.

I agree about the monetizing - and every time I think of it - it makes the blog so crowded . Thanks for the link to the tute!!

I agree-monetizing a blog becomes a job and then it's a chore and then my opinions become influenced by the sponsor. So love that quilt!! I have not yet invested the time in doing Holly's set up but I see it worked well here! Have a great weekend.

Thank you for not monetizing your blog! I love Holly's clear explanations--and your quilt. It just pulls you right in and doesn't let you go.