New Directions - Off the Wall Friday 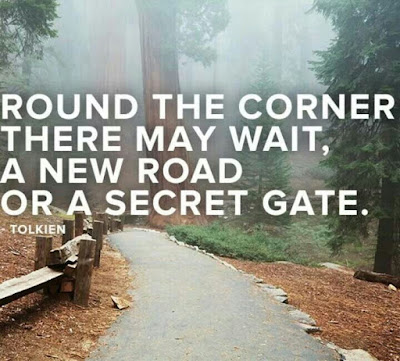 With the new year quickly approaching, I started to day dream about what I want to get accomplished in it.  Its all still a bit fuzzy - I have 6 weeks ya know - but I like to tuck future plans in the back of my mind to ruminate - aka bake!!

One thing I've been playing with is taking my work into a new direction.  I'm not quite sure if I really want to but if I did how does one find a new direction?!?

Step 2:  Create the Vision - You've given yourself permission to change, but seriously, do you know what you want to change into?  Start an inspirational journal, brainstorm new concepts, make lists of things you always wanted to express but never gotten a chance - Daydream!

Step 3:  Chapter of Change - Give yourself  plenty of time to explore your new direction.  Not all journeys take the most direct route.  There are going to be plenty of false starts, new techniques and hours of just exploration.  To quote Tolkien (again - grin)

Step 4:  Embrace the New - Show off your new voice and leave the old behind.  What do I mean?   Its like a pair of jeans, in the beginning they are a bit stiff, scratchy and feel totally alien.  After a few washings, more than a few wearings, they feel like they were made specifically for you.  Accept the change as something not really "New"  but  just another part of yourself that hasn't emerged until now.  Once you accept it, everyone else will to.

A Famous Artist who took a new direction??

Georgia O'Keeffe
Off the Wall Friday will post during the Thanksgiving Weekend!

So What Have You've Been up to Creatively?

Labels: Off the Wall Fri, SteallikeAnArtist