Renewal of a Fall Project - Off the Wall Friday 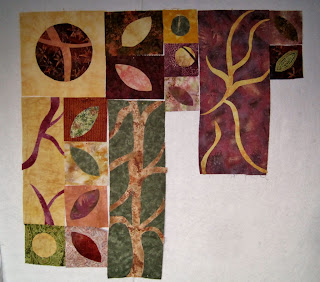 Well, as anybody who knows me will tell you - I have a habit of starting a piece and working my way through to the end,  and then starting another.  I'm not the type to start several pieces at once.  Now that means I only have a handful of UFO's (UnFinished Objects).  Of course to be officially classified as an UFO, I have to be at  an "OMG, I'm stuck" point. 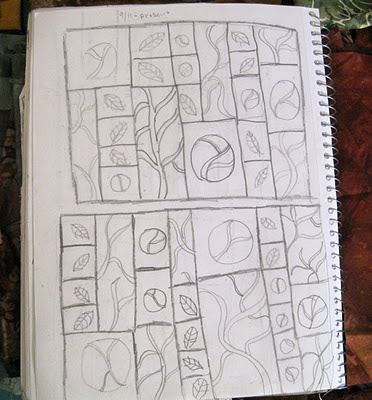 With me not having my hands on fabric in about two weeks, I was beginning to jones for a cotton fix.  I mean, I did finish 4 more designs for the Girls and I thought I deserved some serious fabric-machine time.  So I took out an old project which I had stopped  not because I got stuck but because I needed to work on another piece that was on a deadline.  Back in October 2011, I wanted to make a piece for my family room wall.  I needed something with warm fall colors that was decorative but not to hard.

So 8 designs later (yes I did 8 that time!) I found a came up with a base idea.  That spot still needs a Fall Piece.  So, I took out the box that has been sitting patiently by my table for two years waiting  for me to finish it up.  It was fun to rediscover the project and it was really fun to play with such an easy concept!

My new plan is to finish up this fall piece for my wall while I'm designing the Girls and getting ready for Arrowmont which is less than a month!!  Gosh where is the summer going???

So what have you been doing creatively??

That is a bold and well balanced piece. I really like it, and can just imagine it with quilting line, a bit of sparkle. Nice design.
LeeAnna Paylor

It looks like it's going to be a beautiful piece to have in your living room!

So many design ideas. It will be exciting to see the final quilt.

I love the colors! So earthy!

I love the colors and how traditional quilt methods are designed into blocks with such a fresh look.

I too like your colors and both layouts are great, but I prefer the top on, but not sure why.

You continue to inspire me with your testing multiple designs before starting your quilt.

Beautiful fabrics , bold, graphic design and will be fun to quilt. Love earth tones. Shouldn't you be waiting until the last minute though, can you work without the stress of a deadline?

What fun...can't wait to see this lovely work finished!

Even with detailed planning....don't you find that you still change things as you go along? Love seeing the sketches and it coming to life in fabrics

Beautiful!! I just love where this is going. :) Hahaha - now MY quilting style is much like my cleaning style...I never seem to finish one project before starting another!!!

I do love your work.

Hi, Nina Marie. Lovely colors and interesting design. I do enjoy seeing your process. The previous post about fracturing was interesting as well.
best, nadia

This is a wonderful piece! Maybe it will inspire me to make a new fall quilt to replace the one that I've been hauling out for many years.

I have always liked that color schematic. The whole thing just has such a calm and homey feel to it!

Lovew your fall piece. I need to dig out my leaf quilt and quilt it. I just was stuck on how to quilt it.

I totally forgot to post Off the Wall Friday. I guess it will have to wait for next week. I worked on moulin rougeat the retreat, and stopped because someone was kibitzing too much. Maybe it will get a bit larger than it was at the retreat!