Angelina Fibers & Off the Wall Friday

Okay.  I'll admit it.  I procrastinate.  I'm sure this is isn't a big surprise to anybody who knows & loves me.  But gosh - when you're staring at a composition on your design wall for weeks that is  lame, lame, lame (and that's lame - not lamay) - wouldn't you procrastinate??

I don't know.  Maybe I was waiting for the nighttime fairies to swoop in one evening and fix what obviously I couldn't.  Orrrrrrrr maybe I was just waiting  for an earthquake to just shake it all into the right place.  Still I had no idea that my salvation would come in the form of  a little pack of   Angelina Fibers - which is the best dang thing since BACON!


OMG - is this stuff cool or what??  Is that Sun/Moon neatolina?!?!  Yes  - I have no clue if that is a sun or a moon - but who cares when it sooooo darn cool (almost as cool as Bacon - but not quite - although a lot less fat and calories). 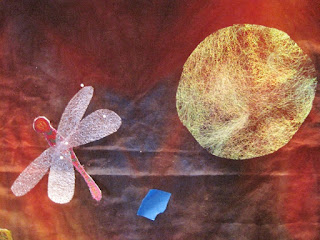 Its so easy to use!  All I did was take it out of the package  - sandwich it in my teflon applique sheet in a thin layer - press it for 5 sec on the silk setting.  And wal- la - very cool Moon/Sun - it was easy enough to cut into the shape I wanted.  I did press it a bit longer to give it that more crispy color!

I also decided the piece needed a dragonfly since none of my other lily pieces had dragonflies.  I got the idea for its wings from Sandy (who came for a visit today).  She loved this one piece of  special occasion fabric I had.  After she left, I thought - hey that would make great wings and it would balance off the Angelina shimmer nicely.  So I layered it on a piece of light sheer fabric - used Ultraviolet Misty fuse and made a set  of quicky wings.

So for only 2 hrs in my studio, I finally had a break through!  I think the rest of this piece should go easily - well until the quilting line has to be decided on.  Its always somethin' isn't it??

So what have you done creatively???

good idea, the, I would say, moon!

The shimmery moon does give it the focal point needed - I can see it really coming together. Once you get the grasses on, and add some foilige etc to the bottom to link the Lilly's, you'll like it better. Is that a stump on the right? Once that is defined, then your eye will be drawn to the moon and the dragonfly - poof! A masterpiece!

That beautiful sun/moon balances the composition beautifully. It's really coming along!

It is starting to come together. And looking very nice in the process.

I am not sure how to say this. That red in the background is in juxtaposition to the coolness of everything else. How are you working to pull them together? Or do you want them to be diverse?

Looking good! Looks like you are enjoying the process.