Silk Painting 101 - Off the Wall Friday 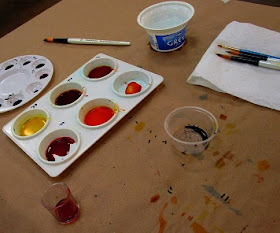 So I decided to not take a quilting class at John C. Campbell Folk School.  Okay, in my defense when I signed up last November for Silk Painting with Vicky Luffman, I really had no idea what it was.  I mean I thought I knew what it was.  You paint on silk right?!?  But gosh I've been in the surface design quilt world for so long that I thought we would go in and put some paint on silk and then it would be made into something else. But no!!  Apparently, people actually paint on silk - with brushes - paintings on actual silk.  And she wanted me to do THAT!

On Monday morning, I was thinking what did I get myself into!!   I swear to God if I had my sewing machine I would have changed to the doll making class going on in the quilt studio in a hot minute.  And I would have missed an amazing experience.

After a Monday night dinner bemoaning that I don't paint to my husband and anybody else that would listen, I put on my big girl pants and gave it my all.  It really is a versatile  medium full of so many surprises and nuances.

You first  start out with inspiration and a sketch.  Vicky brought many sketches to trace for those of us who don't draw.  She asked me if I wanted to trace one of hers or maybe she could draw what I wanted but after the look I gave her, I think she figured out that I wasn't that kind of girl. I figured if I was going to go down, I was going to go down with my own work.

We took 10 mm habotai silk and stretched it onto bars tacking it down with push pins.  Then our sketch was traced onto the lightly with a pencil.  Painting on silk is not like painting on canvas.  First of all, we weren't using paint.  We were using acid dyes.  Secondly, that dye will migrate through the silk like a hot knife through butter if you don't stop it with something.  We used a water based resist method which formed lines through our work and kept each color where it should go.  Now if you put the resist down on the white silk - it will leave a white line.  If you paint underneath it (called dry painting), it will leave that color line you painted.  Of course, I decided to do a lot of dry painting which doubled my work. 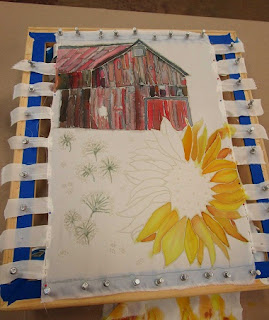 Sometime Tuesday morning, I realized that although I didn't know how to paint, I did know a lot about composition, value and color.  That was when it clicked.  I just started thinking of the dyes as fabric and started using them as such in my piece.  My life became much easier.  As I worked on my one little painting over 3 days though, my classmates were doing two, three or four of them.  Still the rule at John C. Campbell's is that this is NOT a competition.  There were only a couple of people in the class who had painted before so I wasn't the only beginner!


Once the initial painting was done, it needed to dry thoroughly, then placed in a steam bath for two hours to set.  The resist is then washed off and you iron it dry.  And Wha- La.....You have a painting.  I did two others but this was my main piece.  I was so glad I chose a piece that I could play with how the dye hit the silk and how the colors mixed together.

Talking to my whole class, I think everyone had fun.  We were tired....I painted till 8 or 9 every night but I learned so much.  We also learned how to dye scarves.  Well my class learned how to dye scarves!  Apparently silk scarves are dyed just like cotton (even in their own version of the Red Solo Cup Dyeing method).  This I knew how to do so I just kept learning how to use a brush.  To paint.  An actual picture. 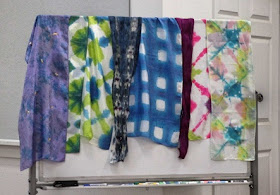 Where was my husband  during all of this???  Well he took a Windsor chair class.  Now Paul is an accomplished woodworker.  He tends to do artisan functional pieces.  This one, however, was all done by hand.  When I would mention to people that Paul was in that class, they all laughed and said don't plan on seeing him much.  And they were right.  We met up for meals and 11 pm for bed where he was snoring in 30 seconds.  Still his whole class managed to make a Windsor chair in less
than 5 days.  Now he just needs to make 5 more....grin


Looking back at the class as a newly retired painter, I can highly recommend Vicky as a teacher.  She was ridiculously energetic and generous with her time.  She stayed every night to teach till 9 pm.  She came early to clean the gorgeous studio and she was our biggest cheerleader.   Really all the teachers were top notch at the school.  I didn't hear one bad comment about any of them and several - like Vicki - had taught there for several years.  I like how they made even the very beginning beginner feel successful  by the end of the week.


So did I find a new passion....ahhhhh no.......truth be told I missed fabric terribly the whole week.  But now I totally learned what I originally set out to do.  I can now surface design and paint on silk proficiently to be used in my own work.  I even came home with enough supplies to play with this summer.

I love, love, love this Picture - It makes me smile!

If anybody has any questions about the school, or class or silk painting method please leave them in the comment section and I'll answer them there.

So What You Been Up to Creatively?

You are invited to the Inlinkz link party!
Click here to enter

Thank you so much for your comment! Its great to get feedback!!!